LONDON, 22 March 2019 - On World Water Day, Action Against Hunger calls on donors to increase their efforts to ensure that funding for access to water, sanitation and hygiene meets the needs of those left behind in humanitarian crises.

Humanitarian crises have a significant impact on people's ability to access safe drinking water and adequate sanitation facilities. In 2018, 80 million people - the equivalent of the population of Germany - were deprived of access to drinking water due to increased and protracted humanitarian crises. This encourages the spread of waterborne diseases and has serious consequences for people's health and nutrition.

Regarding the conflict in Yemen, many water supply infrastructures have been destroyed or are not working properly, depriving more than half of the population of access to a sustainable water source. This has fuelled the cholera epidemic, killing more than 2,800 people, and leaving two million children malnourished in Yemen.

“The international community is failing to meet the needs of millions of people. In 2018, donors only covered 42% of the water needs of people affected by humanitarian crises,” says Michael Siegel, Advocacy Adviser at Action Against Hunger.

In Bangladesh, whilst 89 per cent of water consumed by the 900,000 Rohingya refugees is contaminated, last year donors only mobilised a quarter of the funds needed to cover their water, sanitation and hygiene needs.

Furthermore, existing funding is often inefficient and poorly addresses the needs of conflict-affected populations. Nine years after the Syrian crisis began, due to the lack of water network maintenance, 90 per cent of informal refugee camps in Lebanon do not have access to a direct source of safe water and refugees often depend on water trucking.

World Water Day should act as a wake-up call for the international community to mobilise sufficient and adequate funding in order to provide immediate and sustainable access to safe drinking water for refugee populations and those internally displaced by conflicts. 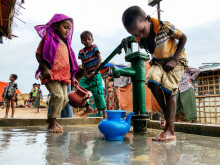 Rohingya children collect water from a pump in Kutupalong-Balukhali ‘mega-camp’ in Cox's Bazaar. 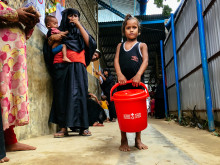 A Rohingya child with a water bucket at Action Against Hunger's Emergency Operations Centre in Cox’s Bazaar. 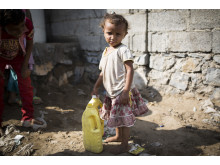 A young girl carries a plastic water container in Yemen 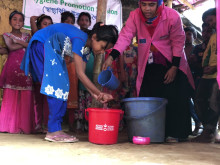